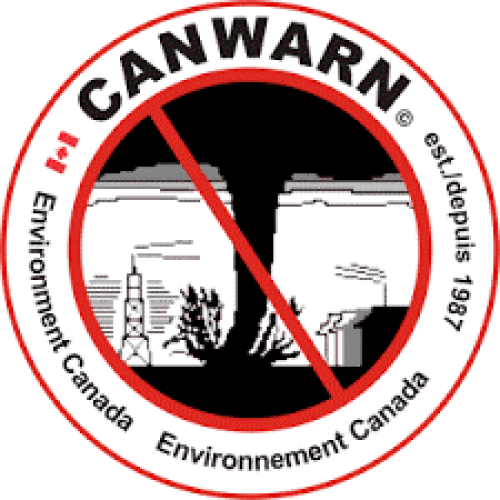 CANWARN
CANWARN is a volunteer organization of ham radio operators who report severe weather when they see it to Environment Canada. What they do is called ground-truthing. They confirm on the ground what satellites and radars see in the atmosphere. When Environment Canada's weather centres issue severe weather watches or warnings, they alert the CANWARN volunteers at the organization's regional stations in the affected areas. The volunteers contact other CANWARN members on the ham radio, tell them a watch or warning has been issued and ask them to report signs of approaching severe weather. These include lightning, hail, cumulonimbus clouds or as they are known in the trade CBs, and funnel clouds, which if they touch down are then called tornadoes.

CANWARN is organised in local networks. When CANWARN members spot severe weather, they send their reports to the CANWARN network controller who forwards them to Environment Canada's severe weather office in Toronto using either a special telephone line or the CANWARN web page. At the weather office, the severe weather meteorologist combines the data from the satellites and radar with the information from the ground to refine the forecast or prepare a severe weather watch or warning. In Ontario, CANWARN stations are equipped with computers, printers, and ham radio.